Most any dialog that require folder paths or file patterns can accept either simple entries, e.g.

or very complex strings that specify not only what to include but also what to exclude from a, most typically, search.

This page describes the complete description of how to use these fields to their full advantage.

Specifies one or more paths to be scanned. For instance to scan the My Documents directory on drive C: enter:

(Note: if you are comparing folders either from the Compare Folders or Paths dialog or directly in the Create File Set dialog two and only two paths must be entered in this field)

Select the drives or paths you want to check. Multiple paths are separated with the semi-colon (;), comma (,) or bar character (|). You can even specify folders to exclude by preceding the name with a minus sign. For complete details right-click the field in the program.

If you would like to collect files on all of drive D: and in the My Documents and My Installations folders on drive C: enter the following.

(Of course, the entry C:\My * would search all folders in the root of drive C: which began with My then a space and end with an s.)

The use of a wild card is restricted to the last element of the path. For instance, the following examples will not work:

But the following will work:

(It would return files in folders C:\My Videos and C:\My Pictures if present.)

To search both the Normal and Nermal directories on drive D: you could enter either:

Paths to be excluded can contain the normal wildcard characters, * and ?. (Use full paths, e.g. C:\house\pictures) to avoid excluding all paths, e.g. every folder named 'pictures'. This can be especially important when using wildcards.)

Note that the order of the entries is ignored: in the above example any Temp and Backup folders will be ignored on drive D: as well in C:\My Documents

Using Wildcards in Folders to be Excluded

Using wildcards in folders to be excluded is almost exactly the same as it is to use them in paths to be scanned. For instance:

Would search all of drive C: except for files and folders in and below any root folders beginning with a 'C' and ending in 's'.

Enter the names or name patterns of files and folders you want included in the search.

Leaving the field empty is the same as specifying a single asterisk '*' or the traditional '*.*' meaning include all files.

The common wildcard characters '*' and '?' can be used when specifying groups of file to be included.

The entry *.tmp | *.bak | ~* will find all files with the extension tmp and bak as well as all files beginning with the tilde character '~'.

Excluding Files and Groups of Files

(Note that there is no *.* or just * in the beginning. Remember that if there is no include specification then *.* (all) is assumed.

For example the these two patterns are equivalent: -*.zip and *.* | -*.zip (include all files except those with the zip extension).

While the drop down list box will remember the most recently used patterns, even when FileBoss is closed, you can use predefined 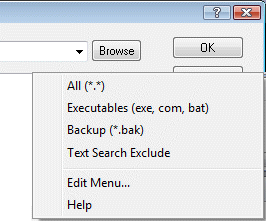 Displays a pop up menu of predefined file patterns that can be quickly added to the 'Patterns' field to the left.

You can edit this drop down menu to include the file patterns you use the most (use the 'Edit Menu' option at the bottom.)

The patterns fly out can hold up to a maximum of twenty entries.

Allows you to edit the contents of the Patterns: drop-down list box.